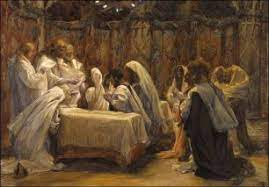 The universe and everything in it belong to God.  It is created by God; all of it.  Physicists, astronomers, chemists, biologists, and geologists weigh in on how the world came to be.  Their scientific methods of observation describe what God has done.  Everything is God’s.  God’s values are ultimate values and apply to everyone.

This is why the death of Daunte Wright last Sunday in Brooklyn Center, Minnesota at the hands of a police officer who mistook her firearm for her taser, is so awful.  One of God’s ultimate values is life.  Jesus says, God is God of the living.  Speaking in Luke 20, “to him all [who have died] are alive” (v.38).  God has no place for death.  The death of a 20-year-old young man is an offense to God.

The list of unarmed black people killed by white people in America is impossibly long.  It is our national shame that it keeps happening, and that people – mostly white – emotionally defend the integrity of the police instead of mourning the evil of institutional bias that results in so many defenseless people dying.  We hear that most police are people of good character.  That’s true, but it’s not the point.  We hear that Daunte committed some misdemeanors.  Again, not the point.

I have an 18-year-old son.  He has had public encounters with the police; not as many as I did when I was his age.  And he hasn’t done anything dangerous or too destructive and he does not have a record.  But, if a simple encounter with an officer ended in his death, it would tear my world apart.  Think of someone you love, deeply, about my son’s age, or Daunte Wright’s age.  Think of how devastated you would be if that young person died.  How hard would it hit you?  The death of Daunte Wright should hit you and me that hard.  It hits God that hard because God made us to live.  You and I and my son and Daunte Wright, God made us to be alive.

Parents of black young people have to have a talk with their kids about how to act when pulled over by the police for the most minor of offenses or even for doing nothing.  They have to have this talk because black people are so much more likely to be pulled.  And those encounters are so much more likely to end in death at the hands of officer we trust to protect us.

We can talk all about systemic injustice, slavery, Jim Crowe, and mass incarceration. We can talk about the root issue being white people’s desire to hold onto to power and to keep black people in a socially subjugated role.  Individual white people do fight alongside black and brown brother and sisters for a more just and equal society, and we may be gaining ground, the trial of Derek Chauvin for killing George Floyd and the death of Daunte Wright at the hands of 26-year police veteran Kim Potter make it clear we aren’t there yet and we have along way to go.

We could have that racial justice conversation, but on this third Sunday of Easter I bring up Daunte’s death for a theological reason.  God is offended and dishonored by what happened.  The fear our black neighbors have to endure every time they do the most mundane thing, drive a car, is unacceptable to God.  Remember.  America is God’s possession.  You and I might tell ourselves we are masters of our own fate, but it’s a fallacy.  The truth is we are God’s.  God’s values are ultimate for us.  God values life.  To God, Daunte Wright and George Floyd are alive.  Don’t believe me?  Wrestle with what Jesus says in Luke 20:38. Take all the time you need.  Jesus insists that God’s ultimate value applies universally; to everyone.

Racism is only one space in which we mock God’s creation with our prolific killing.  What are others?  When I preached Luke 24 in 2007, I had only been pastor here a year.  As I read the resurrection story, I looked around my life and saw death in every direction.  First, I was called to my previous church to preach the funeral of a beloved member.  We wouldn’t call the death of one in his 80’s, by natural causes, a tragedy.  God actually would.  God did not create us for death; not death by Gunshot, not death by cancer, not death by old age.  God created us for eternal life. In April 2007, I preached my friend Ralph’s funeral and God was honored by the love we showed.  But even that, what we call ‘sensible,’ death was an affront to God.

A few months later that year, senseless killing followed.  August 14, 2007, over 200 Yazidis in Iraq were killed in a terrorist bomb.  Americans don’t know who the Yazidis are, so we pass off such news as ‘something terrible that happened over there.’  I hate that vacuous phrase ‘over there.’  When Americans use that phrase, we are insulting ourselves.  ‘Over there’ means ‘not here,’ so, not my problem.

What happened on August 16, 2007, certainly was our problem.  Seung-Hui Cho shot and murdered 32 of his classmates and professors at Virginia Tech, and then killed himself.  It happened at Tech, not ‘over there.’  It could happen at UNC.

All of it disregards God’s intent for humanity.  As Jesus said, he is God of the living.  Death in situations of racial prejudice or racial profiling or unconscious bias, death in school shootings, death in war, and death of natural causes; all of it is the opposite of what God had in mind when God created Adam and Eve.

In God’s vision, nature, humanity, and God all live in beautiful harmony with each other.  The Jewish idea describing this beautiful state of Eden is ‘shalom,’ a combination of peace, bliss, safety, provision, and most importantly, right relationships.  This was lost in the fall and this is what God restores in the coming of Jesus, the death of Jesus, and the resurrection of Jesus.  The story is not complete until the disciples meet and touch the risen Lord.

The empty tomb did not convince Jesus’ followers he was alive.  On Easter morning, when the women told the disciples, they had seen an angel who told them he had been raised, Luke 24:11 they did not believe it.  Do we think the empty tomb was evidence that would show skeptics, scribes, and Romans Jesus was alive?  The empty tomb didn’t even convince his own followers.

Then, two others, Cleopas and his wife who is not named, meet Jesus making the 7-mile walk from Jerusalem back to their home in Emmaus.  Though they were his followers, they do not recognize Jesus until he breaks bread with them.  He breaks the bread, a physical act in their presence, and then vanishes.  They immediately turn around and hike 7 miles back to Jerusalem to tell the disciples what they’ve seen!  Jesus, alive!

As they tell their story, Jesus, who they saw vanish, now materializes before them and the eleven disciples.  This is where our reading for this morning picks up.  We know the disciples did not believe Cleopas.  They didn’t even believe their own eyes.  Resurrected Jesus says to them, “Peace be with you,” but the next verse describes them as ‘startled and terrified’ thinking they are seeing a ghost.

The empty tomb, testimony of friends they absolutely trust, and even their own eyes are not enough to shake the hold death has on these disciples.  They saw Jesus’ miracles and heard his teachings, yet they remained locked in their sense that natural forces, not God, determine how things are in the universe.  The dead stay dead.  It’s what they expect.  It’s what we expect.

What’s the first recorded meal in the Bible?  It’s Adam and Eve, eating forbidden fruit.  The first meal rips apart the serenity of God’s creation and brings death in when God never intended death to be in this story.  Adam and Eve made a choice.  They were in a garden full of fruit trees.  Clearly God intended eating to be part of his creation when it was at its best.  God wants us to enjoy life, just on God’s terms.

At that first meal, the first humans rejected God’s ultimate value of life and instead opted for toil and death.  We chose the wartime massacres of people like the Yazidis and we chose school shootings and we chose institutionalized racial bias and the death that comes with it.  Every time an Officer Kim Potter shoots a 20 year-old Daunte, Adam and Eve and you and I take another bite of that apple, when we could be eating all the other fruits God put there for us to eat.

Jesus announces new creation with a meal.  In this act, he undoes the harm of Adam and Eve in Genesis 3, and begins the new day.  He asked the disciples in Luke 24:38, “Why are you frightened, and why do doubts arise in your hearts?  Look at my hands and my feet; see that it is I myself.  Touch me and see for a ghost does not have flesh and bones as you see I have.” Then he asked if they had anything to eat.

The resurrection had to happen.  What was lost as Adam and Eve and you and I munched on forbidden fruit had to be restored.  Eating fish with his scared disciples, Jesus reset creation, with our sins atoned and eternal life assured.

At the first meal of new creation, there was no white supremacy or systemic injustice or violence or death.  Those things had no place there.  There were and there are places set for you and me to sit down together in love and right relationship.  The resurrection assures our place at Jesus’ table alongside Trayvon Martin, who sits with George Zimmerman, next to George Floyd sharing fellowship with Derek Chauvin, and Daunte Wright and Kim Potter.  None is killer or victim because sins have been covered and death is no more.  Because of the resurrection, we sit in right relationship with one another, with God, and with all that He has created.