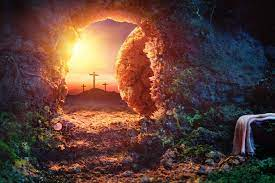 A man overhears his friend say the police were at the elementary school.  He turns white with horror.  These are dads of second graders, and the first guy has been watching the news and become fixated on stories of mass shootings.  Panic-stricken, he asks, “What happened?” The second man, the story-teller, looks at him and says, “Nothing.  I was just talking about how cool it was that the police were at the school doing a demonstration with K-9 unit dogs.”

False assumptions distort our perception, of reality.  In the dark, early Sunday hours, Mary Magdalene discovered that the entrance to the tomb where Jesus was laid to rest on Friday had been opened.  The rock sealing the tomb entrance was rolled aside.  She assumed someone had stolen the body, so she ran to Peter and the Beloved Disciple and said, “They have taken the Lord out of the tomb, and we do not know where they have laid him” (20:2).  We do not know.  We bump into several unknowns in John 20.  Mary did not know where Jesus’ body was.

I have discovered freedom in saying three simple words: “I don’t know.”  Acknowledging my own ignorance protects me from leaping to false conclusions.  It makes me curious, especially when reading the Bible.  When confused, I tenaciously seek answers.  And, I don’t confidently assert untruths as if they were true.  The church does not demand that I have all the answers, so I shouldn’t pretend to know things I don’t know.

He outran Peter, but didn’t go into the tomb upon arrival.  Why did he hesitate?  I don’t know.  Upon arrival, the slower Peter went in, and then the Beloved Disciple followed.  They discovered the linens meant to enwrap the body lying where the body should have been.  The head cloth was not with the rest of the linens.  The head cloth was rolled up and set off to the side in a place by itself.

John tells us the Beloved Disciple believed, but did not understand.  What, exactly, did he believe?  Belief soaked in incomplete knowledge comes up more than once in this gospel.  When grief-stricken Martha talked to Jesus in chapter 11 about her dead brother Lazarus, he said to her, “I am the resurrection and the life.  Those who believe in me, even though they die, will live, and everyone who lives and believes in me will never die” (11:25-26).  He’s saying this where Lazarus, Martha’s brother, lay dead.  He then asks Martha, “Do you believe?”  “Yes, Lord, I believe.”

Does she?  He talked about being “the resurrection and the life.”  She says, “I believe you are the Messiah, the Son of God.”  Did she hear Jesus’ words about people never dying?  When she said, “I believe,” did she understand what it was that she believed?  When we express our faith and belief that Jesus rose from death and in him, we will too, do we understand what we are saying?

The beloved discipled believed, though what he actually believed we cannot say because he also misunderstood the way Jesus’ resurrection fulfilled scripture.  And what about Peter?  What did believe was going on?  The gospel doesn’t say.

It does say after they left, Mary lingered and then looked into the tomb herself.  She saw two angels.  Peter and the Beloved Disciple didn’t see angels.  They saw clothes and head wrappings for a corpse, but no corpse.  Were the angels invisible to them, but then visible to Mary?  Did the angels slip in after the men left?

The angels ask Mary, “Why are you weeping?”  She answers, still locked in her false assumption that Jesus is dead and someone has nefariously robbed the grave.  “They have taken away my Lord, and I do not know where they have laid him” (20:13).  Did Mary know these were angles?  Was Mary startled or upset to find two unknown persons in the tomb of Jesus?  The Gospel doesn’t say.

She steps away from the tomb and faced toward the surrounding garden.  For the first time, the narrator announces the resurrected Jesus.  For the first description of the risen Savior, wouldn’t we anticipate something more forceful and theatrical than what the fourth Gospel gives us?  It’s as if the resurrected Lord is a background character in a drama where Mary is the star.  Mary has been locked in on what she does not know.  She does not know where Jesus’ body is.

Now, that which she has so earnestly sought, Jesus, stands before her and she thinks he’s a gardener.  He repeats the question the angels asked.  “Why are you weeping?  Whom are you looking for?”  Mary has spent this morning in the land of false assumptions, and who can blame her?  It had been a traumatic couple of days and that was before she discovered graves unable to hold in their residents.  Assuming he’s about to pick up his hoe and go to work on pesky weeds, she repeats her mantra to him, this time thinking she may finally make some headway.

“Sir, if you have carried him away, tell me where you have laid him, and I will take him away” (v.15).  In this statement, made in the land of false assumptions, made from a place of not-knowing, we have a hint of why the resurrection is the event upon which all of reality stands.

In the world as we understand it, the dead don’t bury themselves.  It could be in unmarked mass graves, it could be in cheap pine boxes or gold inlaid, elaborate caskets, or it could cremation; whatever form we choose, we, the living, have to deal with dead bodies.  If we don’t, there will be carcasses in various stages of decomposition all over the place.  This is our reality as it was Mary’s.

What does Jesus have to say to our ideas about reality?  Back in John 10, Jesus said, “No one takes my life. I lay it down of my own accord” (v.17-18).  Mary lives in a reality where she, or someone, has to deal with the corpse of a man they know and love.  Jesus announces a new reality.  The corpse she seeks is the living, breathing man before her.  She finally sees him when he speaks her name.  “Mary!”

Remember what I said?  I found freedom in the phrase “I don’t know.”  I don’t know how this story hits you.  I don’t know what you think about Jesus’ resurrection or resurrection in general.  I do know I have become convinced through my reading of 1000’s of pages from New Testament scholars that the writer of John’s gospel believed he was writing about a fully raised, fully physical body.  Mary grabbed hold of Jesus.  In Luke’s Gospel, and later in John 20, and again in John 21, we see indicators that Jesus’ raised body was tangible but also different.  He could cook fish and share it; he could be bear hugged by Mary; but he could also pass through closed doors without opening them.

That different quality of existence signals that the resurrection of Jesus is the dawning of New Creation.  Do you want to be part of New Creation?  We believe in the resurrection because we believe God is free to step outside the boundaries of natural law, and more importantly, is free to do new things.  Please do not mistake this assertion of new creation for the insufferable platitude “God can do anything.”  That’s something someone says if they get the job they were hoping for, or their teams wins a title.  That sentiment is essentially meaningless.

Forget God can do anything.  Respond to God has done something.  In the risen Jesus Christ, God has ushered in a new age in which all who believe in Jesus and follow him as Lord, will have eternal life.  Jesus declared this in Chapter 3.  His resurrection is the stamp of approval affirming his power to overcome of death.

What I know is that I have studied the evidence of the resurrection.  I believe, historically and logically speaking, the most plausible conclusion is that Jesus’s resurrection happened in actual history. I know that I have studied the scientific method.  I believe the resurrection cannot be proven or disproven scientifically.  I know my experience with God tells me that God is real and that the Spirit of the risen Christ is with me.

Based on what I know, I believe in Jesus Christ, crucified, resurrected, ascended, and present as Holy Spirit.  He is my Lord.  Because I know him, I believe New Creation has begun overtaking a dying world.  Because of what I believe, I invite you to consider the resurrection –death is no more.  Considering the resurrection, I invite you to give your life to Jesus.  Commit to follow him.  There will still be much you don’t understand, but when you give yourself to Jesus, you will know life, abundant, joy-filled, everlasting life.