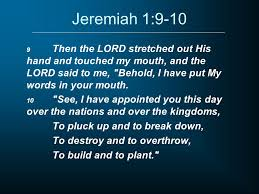 How does God feel about politics in America?  Sit with that question.  What is God thinking?  Our North Carolina senate race has been rocked by a sex scandal.  Our governor’s race is a referendum on how we’ve handled the Coronavirus.  And what can we say about the presidential race, so filled with strife, anger, and hatred?

I heard a word from God.  At least, that’s how it felt.  Not some secret message.  What I heard is there for anyone willing to open the Bible, read Jeremiah, and listen and honestly face what God has put before us.

Jeremiah prophesied in the 6th century BC in Jerusalem, the capital of Judah.  God’s people faced annihilation.   A century and a half earlier, the mighty Assyrian empire had all but destroyed the northern kingdom, Israel.  Broadscale intermarrying with people the Syrians relocated diluted the genealogical ties to the original 10 northern tribes of Abraham’s descendants.

By Jeremiah’s day, Judah remained as the nation of God’s chosen people.  Babylon had taken Assyria’s place as the world super power and was about to overrun Judah.  Jeremiah prophesied that the end was inevitable.  His words ring ominously in our time, if we will listen.  I don’t think some other nation will overrun the United States as Babylon did to Judah, nor do I think the United States is a chosen nation as Judah was.  America is more like Babylon, a super power imposing its will on everyone else.  But Jeremiah’s words still speak because God is as angry at our self-centered arrogance.  God allows sin to run its course and sin always ends up hurting humankind.

Bible scholar Walter Brueggemann writes, “I believe the great pastoral reality for the church in the United States is that we are watching the termination of the world we have loved too long and lost – a world of Western, white, male, heterosexual domination, privilege, and certitude.”[i]  Of course there’s nothing particularly good or bad about being white, male, heterosexual or western, but there’s something unjust about a world where all those qualifiers gives a person a slew of unfair advantages.  People of color, women, and others are tired of bowing before white male dominance.

Termination of a world is the way Brueggeman described the reality pastors must address.  Sinking into Jeremiah’s message, we see the issue is much deeper than the race or gender of our leaders.  We are a materialistic society who relegates God to the margins.  We are hedonistic society whose god, as Paul writes in Philippians is our bellies (our craven appetites for excess, sex, and pleasures we often have not earned).  We are an impatient people who want what we want, and we want it now.  We see God as a possession here to serve us, not as the Lord we must obey.  When God allows the consequences that result from our collective sin, pain and darkness far worse than that wrought by the Coronavirus pandemic follow.

Termination of a world is how Brueggemann put it.  God’s warning in Jeremiah 9 – I will make Jerusalem a heap of ruins, a lair of jackals … a  desolation – is God’s warning to American Christians regardless of who wins on Tuesday.  God’s disgust at how easily we disregard His holiness eclipses the noise of Trump v. Biden.

Thus paying attention to the real issue, we listen to Jeremiah 1:9-10.  “Now I have put my words in your mouth,” God tells his prophet.  “See, today I appoint you over nations … to pluck up and to pull down, to destroy and to overthrow, to build and to plant.  Pluck up.  Tear down.  Build.  Plant.

You’ll hear pastors and religious leaders desperately implore us to pray for this election, the most important one of our lifetimes.  Such rhetoric is nothing more than a cheap fear tactic used to cajole us into praying for victory for the candidate that religious leader supports.  In every election, someone, in a voice dripping with desperation, declares it the most important of our lives. Jeremiah and the other prophets of God did not tie their hope to political leaders.

The prophets spoke hope, but “their hope was not grounded in their sense that things are going to get better, nor in the notion that things were evolving in a desired direction.  Therefore, they were not … undone with things got worse.”[ii]  We will see things get worse.  Count on it.  However, we need not get rattled.  Our hope is the same as that of the prophets – in the new world given as a gift from God.  We have a clearer picture of it than Jeremiah did because we know God’s promises are fulfilled in Jesus, regardless of who lives in the White House.

Jeremiah’s charge from God: pluck up!  He will be the play-by-play commentator calling the action as the structures, conventions, and institutions of our time are uprooted.

This is God’s warning.  In Jeremiah 9 God spoke to his chosen people, the ancient descendants of Jacob, those who lived under kings in the line of David.  With the fall of Jerusalem, the destruction of the temple, and the exile, it appeared the old covenants with Abraham and with David were ended.  God addresses this in Jeremiah 9:12. “’Why is the land ruined and laid waste like a wilderness, so that no one passes through?’  And the Lord says, ‘Because they have forsaken my law that I set before them, and have not obeyed my voice, or walked in accordance with it.’”  God will uproot the ground our society stands on for we have forsaken His ways.

Pluck up.  Tear down.  Understand that God does not relish the state of things.  Listen in Jeremiah 9:1 as God speaks his sadness. “O that my head were a spring of water, and my eyes a fountain of tears, so that I might weep day and night for the slain of my poor people!”  Can God love us, and at the same time allow us to fall into destruction?  Have you ever loved an addict, done all you could to help them, and then watched as their life descended into hell anyway, in spite of your love and your attempts to help them find a new course?

God’s warning is full of God’s deep sadness when He sees us suffer what comes of the sins we commit.  It has to mean something when we say ‘God is love.’ It has to mean something to people in pain, even when they’ve brought that suffering on themselves.  “If the love of God is more than an empty metaphor, then the suffering of God must also be regarded as real.”[iii]

Pluck up.  Tear down.  Societal destruction.  God’s sorrow at our suffering – suffering we’ve brought on ourselves. What else did God tell Jeremiah?

Build. God tells Jeremiah.  Prepare.  Plan.  Remember, Jeremiah was quite certain.  Destruction and exile are coming.  Your life will never be the same.  But, through prayer and study, learning to see with God’s eyes, we get ready for what’s coming, whatever it may be.  Whatever happens next – extended pandemic, backlash from the election results, or some new horror we haven’t anticipated, none it compares with the God who loves us.  That’s why, with confidence, we can say, we meet God even in dark days.  When every warning comes true, we know God is in it, God loves, and is with us.

In chapter 29, Jeremiah tells the exiles, “Seek the welfare of the city where I have sent you … and pray to the Lord on its. Behalf” (29:7).  After Tuesday, we will have the same calling that we had before President Trump was elected.  Again, from Philippians 3:20, “our citizenship is in heaven.”  We vote and try to be good neighbors, but this is all temporary.  We seek the welfare of this city because of the love God showed us as Jesus hung on the cross, dying for our sins.  We build lives here, we glorify God, and we invite our neighbors to put their faith in Him.

The warning ends as all God’s warnings do; with the hope of a new day.  Pluck up.  Tear down. Build.  And finally, plant.  Our culture is not moving farther away from God, or sinning more egregiously.  We are just more open about our rejection of the Lord than ever before.  As many people rejected God in prudish Puritan New England as today, but today, we tattoo our idolatry on our arms.

As Jesus declared himself sent to the lost (Mk 2:17), so too are we.  Having accepted God’s assessment of the world, having built up lives of faith within the fallen world, we then go to the world as God’s messengers, witnesses, telling the truth.  God is love, Jesus is Lord, and if people turn to him, they will receive forgiveness of sins and new life in his name.

If you haven’t already, vote.  Handle your relationships with friends and neighbors whose vote is different from yours with grace, and kindness, humility.  We’re followers of Jesus.  Our calling is about helping people become followers of the king.  No matter who the president is, we answer that call.  We love others, follow Jesus, and share the hope of the gospel.

[i] Brueggemann, W. (2006), Like Fire in the Bones: Listening for the Prophetic Word in Jeremiah, Fortress Press (Minneapolis), p.27.