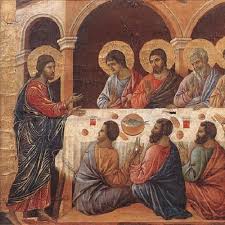 Watch all sermons on our You Tube channel (and please, subscribe 😃).


*This message will be broadcast by Facebook and Instagram Live and posted to Youtube, but will not be preached to a live audience.  We – America, the world – are in the midst of the COVID-19 crisis which is causing people all over the world to avoid gathering in groups of larger than 10, and diligently maintain “social distance.”  It’s an effort to curb the rapid, worldwide spread of the Corona virus which can be deadly.


“Why are you frightened,” Jesus asked his disciples.  They were behind closed doors, gathered on the Sunday evening after the crucifixion. Two disciples had just come from Emmaus to say Jesus, raised, had walked with them the seven miles from Jerusalem to Emmaus.  They didn’t recognize him until he broke the bread.  Then he vanished.  So, they immediately made the hike all the way back the Jerusalem to tell the other disciples what had happened.


The rest of the disciples were trying to piece together what the two from Emmaus told them when Jesus simply appeared among them.  Of course they were afraid!  He was dead.  Now he’s standing here.  He continued, “A Ghost does not have flesh and bones as you see that I have” (Luke 24:38, 39).  The resurrected Jesus makes a specific point of telling them he is not a ghost.


The final line of ‘The Doxology,’ a song often sung in worship, is “Praise Father, Son, and Holy Ghost.”  Yet in most of the theology conversations where the topic is the Trinity, I hear God referred to as, ‘Father, Son, and Holy Spirit.’  “Holy Ghost” seems to be an old way of saying it.  We think of ghost stories, whether horror films or fun, silly stories, like Casper, and we are pretty sure God is not that.  God is something else.  So, we distinguish between ‘Holy Spirit’ and the folklore around ghosts, and most often today, we refer to the third person of the trinity as God the Holy Spirit.


There’s no such distinction in the Greek, the original language of the New Testament.  The same word – pnuema – is used for ghost and for spirit.  Jesus is emphasizing that he is here in person, in the flesh.  In verse 39, he uses the word ‘flesh’ – sarka in the Greek – to describe himself.  He invites them to touch him (v.39).  He eats fish while they watch. Resurrection is embodied.


I offer two reasons why this is so important.  First, anyone who tries to make the case that Jesus’ resurrection was a ‘spiritual’ but not a bodily event is committed to an unbiblical position.  Luke was written about 30-45 years after the death and resurrection.  But Paul wrote 1st Corinthians with a couple of decades of those events.  And he used sources that dated back to within just a few years after the resurrection.  Thus, the earliest testimony from the very first churches was that the resurrection is bodily.  One may have difficulty in accepting a bodily resurrection.  However, it is disingenuous to suggest the New Testament is talking about something else.


The consistent New Testament witness is that Jesus’s body rose.  It was changed and in resurrection operates by physical properties we don’t have the ability to measure or account for.  New creation is beyond what our scientific logic can explain.  Nonetheless, as Christians, we believe in bodily resurrection, first for Jesus, then for us.


The second reason the establishment of the resurrection as an event that really happened in actual history is, we have to deal with it.  If it is true that Jesus rose from the grave, what does this mean for how we live?  We are in a time of overlap.  With the resurrection, the new creation has begun.  However, the world is still dying.  Death is still a thing that happens.  People still sin.  So while the age of degradation and destruction is ending, it has not ended yet.  We live within both realities, the age of death and the new age of the Kingdom of God, inaugurated by Jesus’s birth, life, death and resurrection.  What does it look like when we choose to live by the terms Jesus sets in the resurrection?


For a case study, I offer the story of Bud Welch and Bill McVeigh as told by criminal justice advocate Jeanne Bishop.[i]  I didn’t know either of these names until I read about them this week.  McVeigh is the father of the notorious Timothy McVeigh, the man who set off a homemade bomb in the Oklahoma City federal building in 1995.  One hundred sixty-eight people were killed and another 680 were injured.  Prior to the World Trade Center and Pentagon attack on 9/11/2001, it was the biggest terrorist attack on U.S. soil.


Welch’s daughter Julie was a language interpreter working at the Murray Federal Building.  She died when Timothy’s bomb exploded.  Bill McVeigh is the father of a mass murderer and Bud Welch is the father of one of his victims.  Bud Welch lives as if the resurrection happened and things are different because of it.


As media scrambled to interview grief-stricken relatives of the victims, Welch saw it as an opportunity to campaign against the death penalty.  He lost a child.  He didn’t see the point in any more death, not even the killer’s death.  From there, he took his desire for grace further.  He went to great lengths to meet with Timothy McVeigh in prison.  That meeting never happened, and McVeigh was executed on June 11, 2001.  However, a nun helped connect Welch with McVeigh’s father Bill.


Bill had kept a low-profile after the tragedy.  He couldn’t understand why his son did this horrible thing, and he did not want the McVeigh name to bring any more pain to the families of the victims.  So, he avoided interviews and did his best to stay out of the media.   He does not attend memorial services on the anniversary of the event.   He said he would always love his son, but could not fathom that he did this thing.


Two fathers beset by grief, and grace brought them together.  Jeanne Bishop tells the full story in her book that is now out, entitled, Grace from the Rubble.  Bud Welch knows the resurrection of Jesus is real and by extending grace to Bill McVeigh, he creates space for both men to grieve and find hope.  Could you or I do it as he has?  Could we forgive the father of someone who killed our loved ones?


I hope I never have to find out. The tragedy is immense.  But I am thankful for the story and even more thankful for the story in Luke 24.  There we see that death does not have the final word.  The risen Lord Jesus stands with his disciples, explains the bodily nature of resurrection, and then demonstrates it by eating with them and inviting them to touch him.


In our current environment where we are forced to stay home by a disease that passes aggressively from person to person and is deadly for some, how do we go about living in the new age.  Jesus is alive and we have life in his name.  What difference does that make in COVID-19 America as we are two months into the spread of the disease and the quarantine it has forced upon us?


Jesus said, “Touch me and see, for a ghost does not have flesh and bones.”  We cannot get within 6 feet of one another.  We go around with masks on so that we cannot even see one another’s smiles.  In this strange time, how do we embody the grace Bill Welch demonstrated after his daughter died?  How in our lives do we live as if the resurrection happened, we believe it happened, and it makes a difference?


Answers don’t always come easily.  One of the great commands of Jesus is that we love our neighbors as ourselves, and in the time of COVID-19, respecting social distancing is an expression of love.  Find ways to be with people while maintaining that 6-foot distance.  Don’t take offense if someone else’s fear leads them to act in ways that make interaction awkward.  Bring peace to your encounters with people whether it is in the limited public interactions we have or the interaction is in social media.


Social media is a setting where hilarious humor and uplifting joy is shared, but it is also a playground for outrage and conspiracy theories.  On Facebook, Instagram, and other social media platforms, be a voice peace.  The disciples were overwrought and Jesus bid them calm, as he took away their fear.  The resurrection is peace, light, hope, and welcome.  We can extend all these things.  You can reach out to someone with whom you have had an argument or falling-out.  Invite that person back into your life with a posture of humility and forgiveness.


When the uncertainty and the cramped quartering of stay-at-home orders starts to get to you, turn to the resurrected Lord.  Ask the Holy Spirit to remind you that COVID-19 is a symptom of a world in the throes of death, but another world overlaps this one: the resurrection life in which there is no death.


We are locked in a strange time.  But the grace from one man to another in the midst of a tragedy helps us see a brighter light.  The story of the risen Savior taking away his disciples’ fear takes away our fear.  And the reality that the resurrection means our lives have purpose drives us to see life and spread hope even in the face of frustration and suffering.  Live the resurrection life, renewed daily, and feel doubts and disbelief give way as joy settles on us.


[i] All my information for this story comes from baptistnews.com - https://baptistnews.com/article/25-years-later-grace-and-forgiveness-still-rise-from-rubble-of-the-oklahoma-city-bombing/#.Xph5wchKhPZ
Posted by Rob_Tennant at 8:52 AM