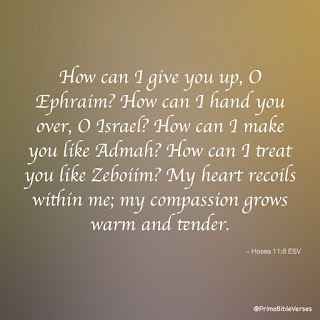 Do you remember, from the beginning, what I asked you to hold onto and not let go?  God’s mercy is bigger than our sin.  In the story of Hosea, God is frustrated because the people He has selected as His chosen ones, the people of Israel, have turned away from God to worship the idols representing false gods: the gods of Assyria and Egypt and other ancient peoples.  Along with this idolatry came abuse of power by many of Israel’s kings, and the corruption of justice, especially for the poor.  The poor were exploited as the rich perceived themselves to be untouchable.  And worst of all, the leading perpetrators of the corruption were priests who were supposed to lead God’s people in worship.
Hosea has vividly depicted God’s anger at the conditions in Israel, 8th century BC.  However, now in chapter 11, we see anger cannot be God’s last word.  Yes, the people sinned and yes the nation did go into exile.  But God went with His people.  Their descendants, the Samaritans, were among the first to meet God’s grace in the person of Jesus.  There was suffering in the story, but it leads to salvation and new life in Jesus Christ.
In the aftermath of 9/11, Waqar Hasan and Vasudev Patel were murdered.  Rais Bhuiyan was injured.  Mark Stroman ended being executed; so much loss in this story.  But out of it, we see grace.  Rais Bhuiyan fought for Stroman’s life.  After the execution, he gave financial support to Stroman’s children in his attempt to end the cycle of hate, violence, and revenge.  He overwhelmed these Texans with his love and he did it for the sake of changing the world, combatting hatred, and glorifying God.
Now, what about my story, or yours?  God sees our sins and sees the hurt we cause to ourselves and those around us.  God pours out love asking, “How can I make you like Admah?  How can I treat you like Zeboiim?”  Deuteronomy 29:23 reports that these cities, Admah and Zeboiim, were destroyed along with Sodom and Gomorrah.  God’s promise in Hosea 11 is that anger and destruction is not the end for people who turn to Him in faith.  Those cities were consumed, but God’s followers will not be.  “I will not come in wrath,” God says.  God comes in grace.  God is love.
The mercy Rais Bhuiyan showed Mark Stroman is a picture of the love God has for us.  God wants the best for us.  God’s mercy never runs out.  God’s love overflows.  You know your own life story.  I know my own sins and how much they hurt me and the people I love.  You know your own sins.
What do we do?
We come before the cross of Christ.  We fall to our knees and pray for forgiveness.  We receive it.  And we stand as healed people, washed and cleansed, new creations marked by the love of God in Christ Jesus our Lord.
Come and lay your heart out before God.  Come and receive forgiveness.
AMEN
[i] Giridharadas, Anand (2014), The True American: Murder and Mercy in Texas, W.W. Norton & Company (New York), p. 263.