(Worshiping by streaming due to “stay-at-home” order/COVD-19) 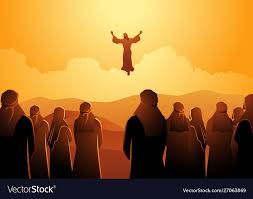 Jesus died on the cross, was buried in the tomb, and rose from the grave.  No one witnessed the resurrection.  Very early on the Sunday morning after Passover, some of his female followers made there way to the tomb to discover it empty.  An earthquake occurred as an angel rolled aside the great stone sealing the tomb.  Ignoring the trembling Roman soldiers, he reassured these women that Jesus had been resurrected (Matthew 28:2-5).


Spectacular as this encounter was, the women did not actually see the resurrection.  No one did.  They arrived, and the tomb was already empty.  Before the women came, the guards had no idea anything might have changed.  But it had.


The gospels each offer their own vantagepoint on the resurrection.  Only one of the gospel writers offers a sequel.  Luke, who wrote the third Gospel is the author of Acts.  Both the gospel and Acts are written as a remembrance sent to a friend named Theophilus.


Acts begins, “In the first book, Theophilus, I wrote about all that Jesus did and taught from the beginning until the day he was taken up to heaven, after giving instructions through the Holy Spirit to the Apostles” (Acts 1:1-2).  With these opening remarks, Luke signals that a new chapter is beginning in the story of God’s salvation of the earth and all people from sin, death, and destruction.  The most celebrated holidays of contemporary Christianity are Christmas, the birth of Jesus, and Easter, the resurrection.  Neither is mentioned in these two verses opening Acts.


Luke will not overlook these seminal events, and, in fact, Luke’s gospel is the primary scripture source for most of our Christmas hymns.  But, when he summarizes the story in just a few line and signals where the story is headed, he refers back to Jesus’ teachings, describes the ascension, and anticipates Pentecost.


To prevent any confusion, Jesus appeared to the disciples, numbering about 120 (Acts 1:5), including the women, the 12, and his own brothers who became his followers after he was raised.  In 1 Corinthians, Paul reports that the resurrected Jesus appeared before a gathering of 500 believers (15:6).  In these numerous appearances, called ‘proofs’ by Luke, Jesus taught about life in His kingdom.  Jesus’ resurrection was fully embodied; when he was with his disciples, he ate and, at times, invited them to touch him (Acts 1:3).


When we are raised, we don’t know if we will need to eat or not; but we know Jesus most definitely did take in food, and do other things that indicate his raised body was indeed flesh, but flesh of a different nature than before the resurrection.  We believe, our resurrected bodies will be like his.


He told the disciples they were to wait in Jerusalem for the promise of the Father.  He wasn’t specific about this promise and they really didn’t understand what he meant, as their follow-up question shows.  He was talking about the coming of the Holy Spirit, but they asked, “Lord, is this the time when you will restore the kingdom to Israel” (1:6)?


Why is that the wrong question?  First, in asking it, they forget that he has already said they would not know the times, so they needed to be ready all the time.  Second, the question reveals a serious distance between what God cares about and what was on the minds of these followers of Jesus.  God is God of the entire world.  Everyone everywhere is mercilessly enslaved to sin, powerless to break free.  The disciples asked about Israel when God had laid out before them the world.  Jesus had not come to make Israel the leading military power in the ancient near east.  He came to save the world.


This dissonance leads to a third indication of misunderstanding.  For Israel to be restored in the sense the disciples asked about, it would mean Rome had to be thrown out of the nation, probably by force, and the Herod dynasty would need to be deposed and replaced by a descendant of David.  The disciples assumed Jesus’ next move was to assume the throne.  Not only did they lack his global vision, they also failed to understand the thoroughly different nature of his kingdom.


What happened next would set the course for the age of the church – the age in which we now live.  Noting that their question revealed how distant the disciples’ mindset was from Jesus’ agenda, it is worth a moment’s pause for us to examine our own perspective.  Are we, like they, asking the wrong questions?


As followers of Jesus, are we concerned about the salvation of the world and the expansion of God’s kingdom?  Or do we give our attention to more parochial concerns?  If we are driven by our desire for greatness of Hillside church, our priorities are in the wrong place.  If nationalism or patriotism are what motivates us, we are way off track.  Nationalism and patriotism are stumbling blocks that make it hard for us to see the Kingdom of God because we get locked in our heads the untruth that America is in some way God’s chosen nation.  It’s not!  The movement in Acts, as we will shortly see is outward, with a heavenly pull.  No nation – not Israel, not Rome, not America – serves God’s purposes.  So, if nationalistic fervor is what propels us in life, we’re headed in the wrong direction.


To be the people of God, we must guard against seeking the grandeur of our church; rather as a church, we seek to expand the kingdom.  We guard against tying our hopes to any nation; instead, we hear God calling us to spread the Gospel in America because like every individual and every people, America needs the salvation only Jesus offers.   Is now the time?  Is now our time?  These were the wrong questions for the disciples.  We don’t want to get stuck on the wrong questions.


Jesus repeated what he had told them in his sermon on the Mount of Olives before he was crucified.  “It is not for you to know the times the Father has set” (1:7).  Then Jesus anticipates Pentecost and gives the Great Commission.  “You will receive power when the Holy Spirit has come upon you,” and empowered in that way, fueled by enduring love, endless mercy, compassion, and deep wellsprings of grace, “you will be my witnesses in Jerusalem, in all Judea and Samaria, and to the ends of the earth” (1:8).  There’s no room to worry about God’s long-term plans for Israel.  They will be Spirit-filled.  Spirit-filled they will then head out, East, West, South, and North.  They will keep moving, talking to whomever they meet about the love of God revealed in Jesus.  They will baptize whoever is willing.  And they won’t stop.


I’ve mentioned several ideas that might seem hard to grasp if thought of as theological doctrines: resurrection, Great Commission, Pentecost. However, we can make sense of this by seeing these as moments in a story – a story we’re in.  The resurrected Jesus assures that when we die, we will, like him, will be resurrected.  Our raised bodies are heavenly bodies destined to live in love and joy with God forever.


Before that time comes, we, like the disciples in Acts 1, are sent out in the Great Commission.  No matter who you are or who I am, once we give our lives to Jesus, we have a life mission.  We are to love others in his name, with grace, and we are to tell others about the salvation he gives.  Pentecost, which we’ll look at next week, is the story of the Holy Spirit filling believers, encouraging us, and enabling us to know God, and empowering us to share our testimony.


We know the story is in a new phase in verse 9.  “As they were watching, he was lifted up, and a cloud took him out of their sight.”  This is the Ascension.  Jesus’ physical, touchable body rose.  Don’t make the mistake of thinking he rose up into the atmosphere and is out there in space somewhere beyond the reaches of our solar system.  It says he was taken on a cloud out of sight because that’s the language Luke had to describe the indescribable.  Jesus didn’t rise into the sky the way a plan does.  He traveled to another realm, outside the confines of our physical universe.  Heaven is a physical place.  It is a place, but one that operates by different physical laws – a world we really don’t have words to depict.  Luke did the best he could.


Also, this departure did not produce what we might think it would in the disciples.  They weren’t sad and did not grieve Jesus’ departure.  In Luke 24:52, it says they had “great joy.”  Somehow, they understood that for the mission to go forward, Jesus had to depart.  His ascension sets up one more point of doctrine that again, we treat as a key story point: The Second Coming.


To review, the ascension shows, that resurrection is embodied and heaven is a physical place, even if very different than here.  The ascension signals that the age of the church has begun and we have an outward, inviting mission.  The ascension marks our lives with anticipation.  We long for the departed Jesus to return even as we celebrate our relationship with God in the present Holy Spirit.


The rest of Acts amplifies the commission to Jerusalem, all Judea and Samaria, and then to the end of the earth.  Peter will enter the home of a Gentile in order to baptize him into Christ.  The disciples will broker peace between Hebrew and Hellenist Jewish widows.  Philip will baptize an Ethiopian Jewish proselyte who will in turn carry the Gospel to Africa.  Paul will take numerous journeys to Greek and Latin speaking cities in order to preach Jesus and lead people to him.  Through prayerful discernment, the original disciples, themselves all Jews, will conclude that gentiles do not have to become Jews in order to follow Jesus.


What questions are we asking God?  Are we asking about our church, our town, or our individual lives?  Or, are we asking him to help us grow in faith and expand our witness to the Gospel of Jesus?


In what ways are we removing obstacles to faith so that people who don’t currently know Jesus can become his followers?  How are we embodying his love?  To whom are we reaching out.  The story of Jesus is the story of the salvation of the world.  This is the story we are in, each and every one of us.

Sunday, May 17, 2020
*This message will be broadcast by Facebook and Instagram Live and posted to Youtube, but will not be preached to a live audience.  We – America, the world – are in the midst of the COVID-19 crisis which is causing people all over the world to avoid gathering in groups of larger than 10, and diligently maintain “social distance.”  It’s an effort to curb the rapid, worldwide spread of the Corona virus which can be deadly.

Posted by Rob_Tennant at 7:44 AM No comments:

Posted by Rob_Tennant at 6:41 AM No comments: