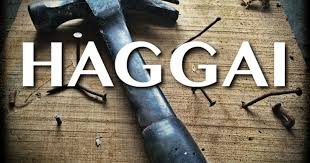 We read the Bible to hear God and relate to God.  It’s not the only way we relate to God.  Throughout the New Testament and throughout church history we see the Holy Spirit speak in dreams and directly to believers’ spirits.  Romans 1 confirms that God speaks through nature.  God can speak through a preacher’s sermon.  There are countless ways to hear God.  The Bible is the one way that is shared by all believers.  We all have the same Bible.  We don’t just read it just to say we read it. We read to hear God and grow in our relationship with God.  Hold onto that word, ‘relationship,’ because that’s the main idea.

As I read Haggai 1 this past week, two incidents helped me hear God speak to this specific moment in history. First, Tuesday night out elders met.  We feel impatient at home, socially distanced due to spread of the very dangerous Coronavirus.  We want life to open up!  With initial roll out of vaccines, in my mind I jumped ahead of where are.  I began imagining us conducting ministries as we had before the pandemic began.  I imagined us doing that very soon. It is the pastor’s job to lay out for the church a path for achieving that imagined future.

We’re just not there yet.  Yes, vaccines are here.  However, with family gatherings around the holidays and colder weather driving more and more folks inside, breathing one another’s air, the number of cases has spiked.  I hear people argue that COVID-19 has been hyped up, and it’s not as bad the media make it out to be, and it’s no worse than a bad strain of the flu.  Cases have risen so sharply in North Carolina; we are running low on ICU in beds.  Just let that sink in; here in North Carolina, we could run out of ICU slots.  Vaccines are here.  One day, COVID-19 will be behind us.  We aren’t there yet, and right now it has gotten worse.

Our elders did their job Tuesday.  They guided the pastor.  They helped me see the situation as it currently is.  It was sobering for me, but also hopeful.  We are doing good in the middle of the pandemic.  We host the food pantry and blood banks.  We stay connected through streaming worship and Zoom Bible studies.  God has enable us to make financial contributions to other ministries in our area.  God is working through Hillside Church to bless Chapel Hill.

I am thankful God speaks through our elders.  Reflecting on that meeting, I realize God was speaking to me then.  God spoke through them to me, but also showed me how He is speaking to all of us through the words of scripture.  We need to bring our hearts along when we read Haggai 1.  If we willingly read with our full selves, emotions and all, we will be stirred up by Haggai.

Speaking of being stirred up … after that Tuesday night meeting came Wednesday.  Refusing to accept the results of an election that have been affirmed by dozens of court decisions, rowdy supporters of Donald Trump gathered on Wednesday on the National Mall in Washington DC.  Riled up by the defiant words of the president himself, they stormed the U.S. capitol.  The videos we all watched on the news over and over of our own congress having to shelter in place because of violent insurrection have horrified us.

I had one church member say in a group conversation on Zoom, “I am sure Rob is going to talk about this Sunday.”  After she said that, how could I not?  Another member said she spent the day weeping as she watched the videos and digested the images of chaos and violence and disrespect of our democracy.  How could I not address this?

What struck me on Friday is how easily the real issue comes to the fore when held alongside what’s happening in Haggai.  As we read last week, Haggai reports God’s frustration that His people were dragging their heels in rebuilding the temple.  Rebuilding the temple would put worship back at the center of Israelite community life.  Worship is the primary context for us to live in relationship with God.  There’s that word again, ‘relationship.’ Humans were created to worship God.  We were made for relationship with God.

After hearing Haggai, Governor Zerubbabel and High Priest Joshua obeyed the Lord.  These leaders led the people to worship God.  Haggai then writes that the remnant, not an overwhelming mass of people, but the small group who remained followed the governor and high priest’s lead.  They obeyed God.

God responded to this overture of worship and reverence from the people with a promise.  “I am with you,” God said.  This is one of the foundational assurances of the Bible.  It’s not a guarantee that all that’s wrong is fixed in the blink of an eye.  It’s the promise that the living God will not abandon us in the face of the storm.  Instead, God stays with us, holding us, even in the darkest hour.

After that promise of presence, Haggai writes that the Spirit of Lord stirred up Governor Zerubbabel and High Priest Joshua and the people.  Stirred by God’s spirit, they got to work.  By the time Haggai’s protégé, the prophet Zechariah was writing his prophecy, the new temple was ready to be dedicated.  Stirred by God, the people did the work they previously thought was too hard.

Now, let this improbable temple building work stand side-by-side with what happened at the capital.  We need to be stirred up.  However, who is doing the stirring?  I don’t endorse candidates or political parties.  I know in our church we have Republicans, Democrats, independents, swing voters, and people who hate politics.  If you think you know my politics, you might be surprised.

On Wednesday, a group of mostly white people, allowed themselves to be stirred up by Donald Trump to the point that they committed an act terrorism and insurrection.  If there is justice, every person who crossed the barricades will be tried and convicted of acts of terror on American soil.  Our senators and representatives, doing their jobs, representing us, were literally terrified by supporters of our president.

We need to be stirred up, as the people in Haggai were stirred up, but by whom?.  Who motivates us to act?  Who we listen to shows what we do when we’re inspired.

Campaigning, before he was ever elected, Donald Trump bragged about grabbing women and dragging them around by the vagina, but he used a much crasser term than vagina.  Also, he openly mocked a reporter who has a disability.  How, in the 21st century, can we tolerate a leader, who mocks people with disabilities?  Tolerate?   We made him president and then followed his lead in making a mockery of our cherished democracy.

He decried nations in Africa as “Shit-hole” countries.  I am sure someone is unhappy to hear a pastor say “shit” in the sermon.  I am equally sure the people offended by me did not utter a word of condemnation when the president said it.  I am quoting him.  I have visited more than one African country and have traveled to the continent 10 times as well meeting scores of Africans here in the U.S.  I don’t know where the president gets the idea that these are shit-hole countries.  Some of the most beautiful, proud, welcoming people I know and count as life-long friends are Africans who follow Jesus with a dedication I pray I could come close to matching.  They’re not shit-holes.  You’re wrong Mr.  President.  I know from experience.

If I said any of the things he said, I’d be fired, and should be.  The mess in Washington on Wednesday happened because too many of us have allowed ourselves to be stirred up this president.  Governor Zerubbabel and High Priest Joshua and the people were stirred up the Holy Spirit.

What does it look like when we are stirred up by the Spirit?  Temples get built.  Churches figure out how to do worship and small group and stay as safe as possible in the midst of a dangerous, contagious, worldwide pandemic.  Food pantries and Blood banks, happen at the church.  The church of Jesus Christ is known for doing good and loving people.

I see in our church people stirred up by the Spirit.  We are doing vital ministry while at the same time showing patience and discovering new ways to be God’s church.  Stirred by the Spirit, we call out evil.  What happened at the capital last week, a mob following the whims of a foolish, self-serving, self-promoting president, was evil.  We name it.

Stirred up by the Spirit, we welcome people of different political stripes and viewpoints.  We come together in the death and resurrection of the one we all love and follow, our Lord, Jesus Christ.

Stirred up by the Spirit, we stand in confidence, knowing that our God is with us, we are His people, He secures our future, and He holds us in His arms.  No politics, no event, no pandemic can disrupt our relationship with God in Christ.  That defines who we are.

Church, we exist to worship and serve Jesus, and to share his gospel.  We love others, follow him, spread hope, and help people God sends to us find their own way into relationship with him.